Where do our cocoa beans come from?

October and November will be followed by a shipping rush of vanilla and cocoa.

Cocoa beans that are harvested in September and carefully fermented, dried, sorted, packed in sisal sacks and shipped.

Our cocoa beans are purchased from a farmer in Budibugyo, at the foot of the Rwenzori Mountains, about 400 km from the capital. Bundibugyo district is the largest cocoa producers in Uganda, with its borders adjacent to the Democratic Republic of Congo.

The endless cocoa forest stretches through the border between Uganda and the Democratic Republic of the Congo. The scenery is outstanding.

Cocoa harvest season in Uganda peaks twice in March-June and September-December, with two rainy seasons a year. The yield is small even in the dry season, but it is harvested all year round. However, in order to keep quality of our cocoa beans, we will buy them after the size has grown properly in the rainy season.

In Bundibugyo district, there are few flat farmlands, and many cocoa trees are planted on the slope of the mountains. Cocoa farmers carry cocoa beans and come down to our buying station.

We carefully process those cocoa beans. 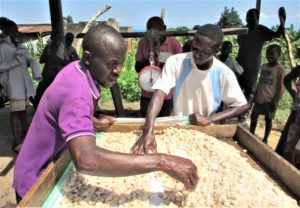 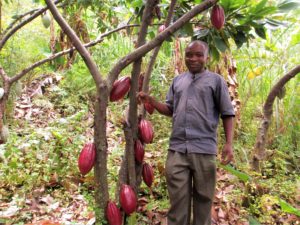